Terraces began to be constructed after research revealed that soil erosion removed nutrients and minerals 21 times faster than growing crops.

McLean County’s first terraces were built on the Snow and Palmer farm southwest of McLean in 1930.

Over 450 miles of terraces were constructed in McLean County by 1977. At that time new methods of conservation replaced terraces.

“During drought years, terrace farming saves moisture. After a heavy rain it is easy to see where the rows have been standing level full of water, all of which seeped into the soil where it fell. Seldom if ever does any water get over into the next row.” 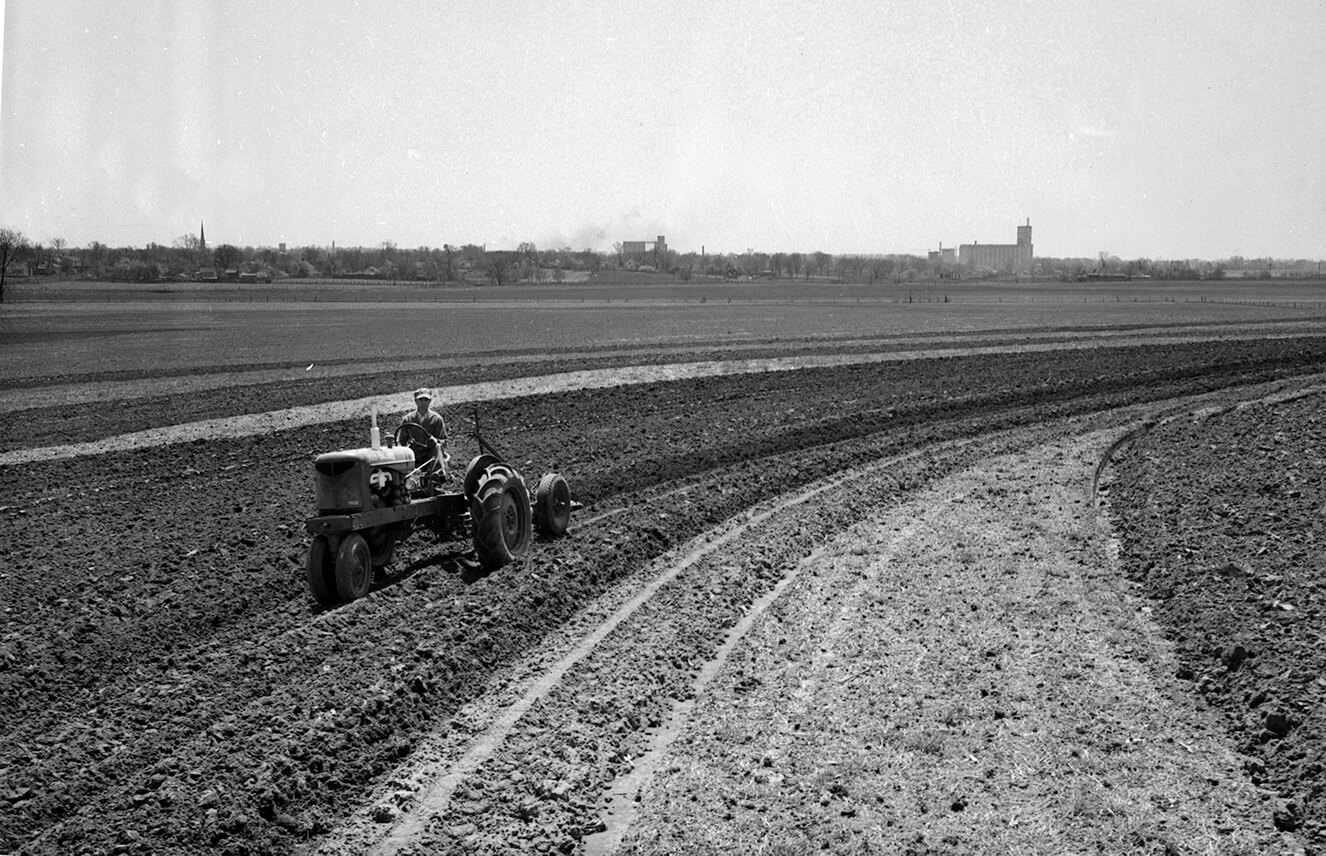 In 1936 many area farmers began to cultivate their fields on the contour in order to reduce soil erosion.

Similar to terracing, but with less earth moved, contoured fields consistently averaged higher yields, even in drought years. It did this by holding moisture, fertilizer, and soil in place.

Contour planting peaked in 1962 with 10,000 acres of McLean County land planted this way. But as planting and harvesting equipment got increasingly larger in the later half of the 20th century, it became difficult to maneuver equipment on contours, and the use of this technique declined dramatically.

George Pitts harvested corn from a farm slope in 1943. Because he planted ﻿on the contour, no topsoil was lost during the May and August rainstorms of ﻿that year. Pitts found it easier to run the picker over the level rows that curved ﻿around the slope than rows that ran up and down the hill. 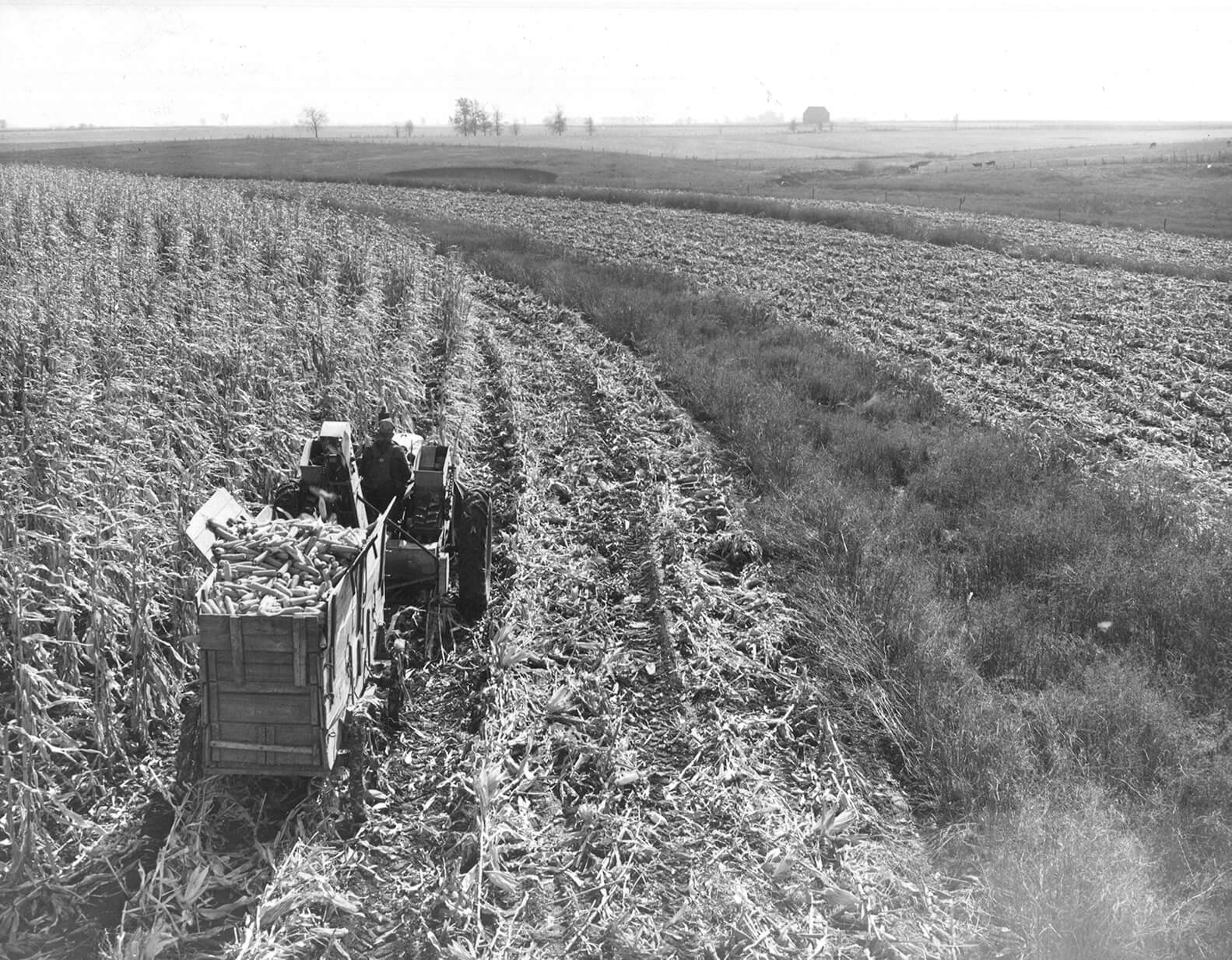 Waterways that allowed the movement of excess water from fields were seeded with grass to keep them from turning into small creeks that moved soil as well.

According to the McLean County Soil and Water Conservation Service (MCSWCS), grass waterways kept over one million tons of soil in McLean County from flowing away with excess water every year — enough soil to completely fill ISU’s Redbird Arena more than twice.

McLean County farmers seeded well over 1,800 acres of grass waterways by the 1970s.

In 1939 C.T. Rodman had a 4.5 foot (1.37 m) deep gully that ran through this field 10 miles southeast of Bloomington and was losing valuable soil every time it rained. With the help of the MCSWCS, the gully was widened and seeded into a 30 foot grass waterway. Three years later Rodman and C.C. Morgan of the MCSWCS examined the waterway after a torrential rain. Though 13 inches of water (indicated on the white stake) had flowed through the waterway, no soil had been lost. 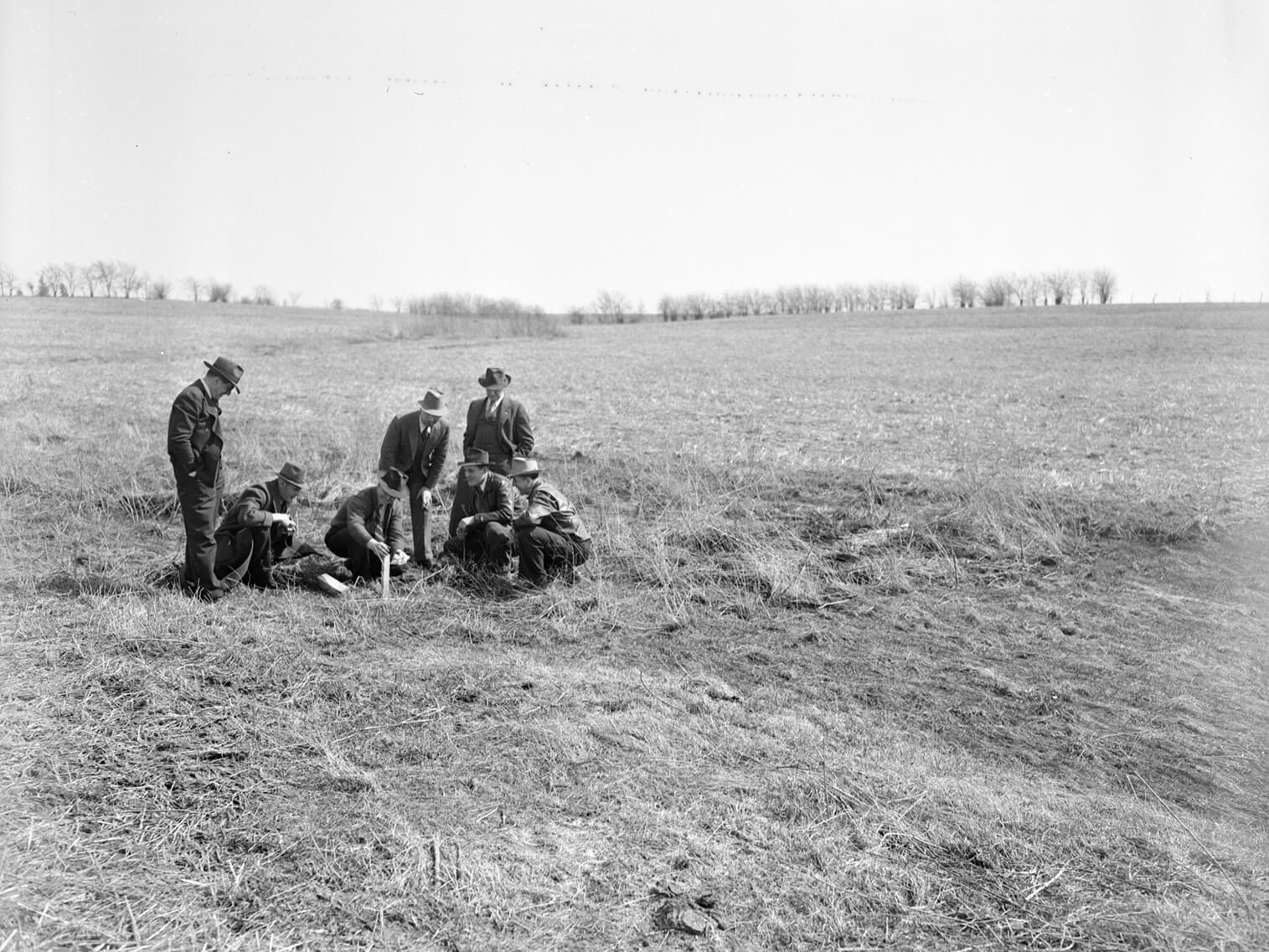 For centuries the most common tool used by farmers worldwide was a plow. But by 1967 conservationists knew that turning the soil over with a plow exposed the loose soil to wind erosion. They told farmers..."Take a good look at your plowed soil; you might never see it again!"

Unwilling to risk trying something new, most McLean County farmers initially changed nothing.

But Saybrook farmer Herman Warsaw was ahead of his time. He stopped plowing his fields as early as 1960. Instead he utilized practices later called conservation tillage.

Warsaw shredded the corn stalks and chiseled the ground. This incorporated the crop residue (stalks and husks) into the soil and helped reduced wind erosion.

In addition, the residue increased the soil's moisture-holding ability and added needed organic material to the soil. The process also reduced soil compaction because Warsaw drove his tractor over the field fewer times.

In 1970 Bloomington’s Portable Elevator Company introduced the Glencoe Soilsaver. The unit had disks on the front for cutting and shredding stalks. Behind the disks, chisels (curved shanks) went deep into the soil to loosen it without turning it over. The unit could also be fitted with an anhydrous ammonia (nitrogen gas) applicator.

Area farmer Al Kuhfuss tested the Glencoe Soilsaver in one of his fields. 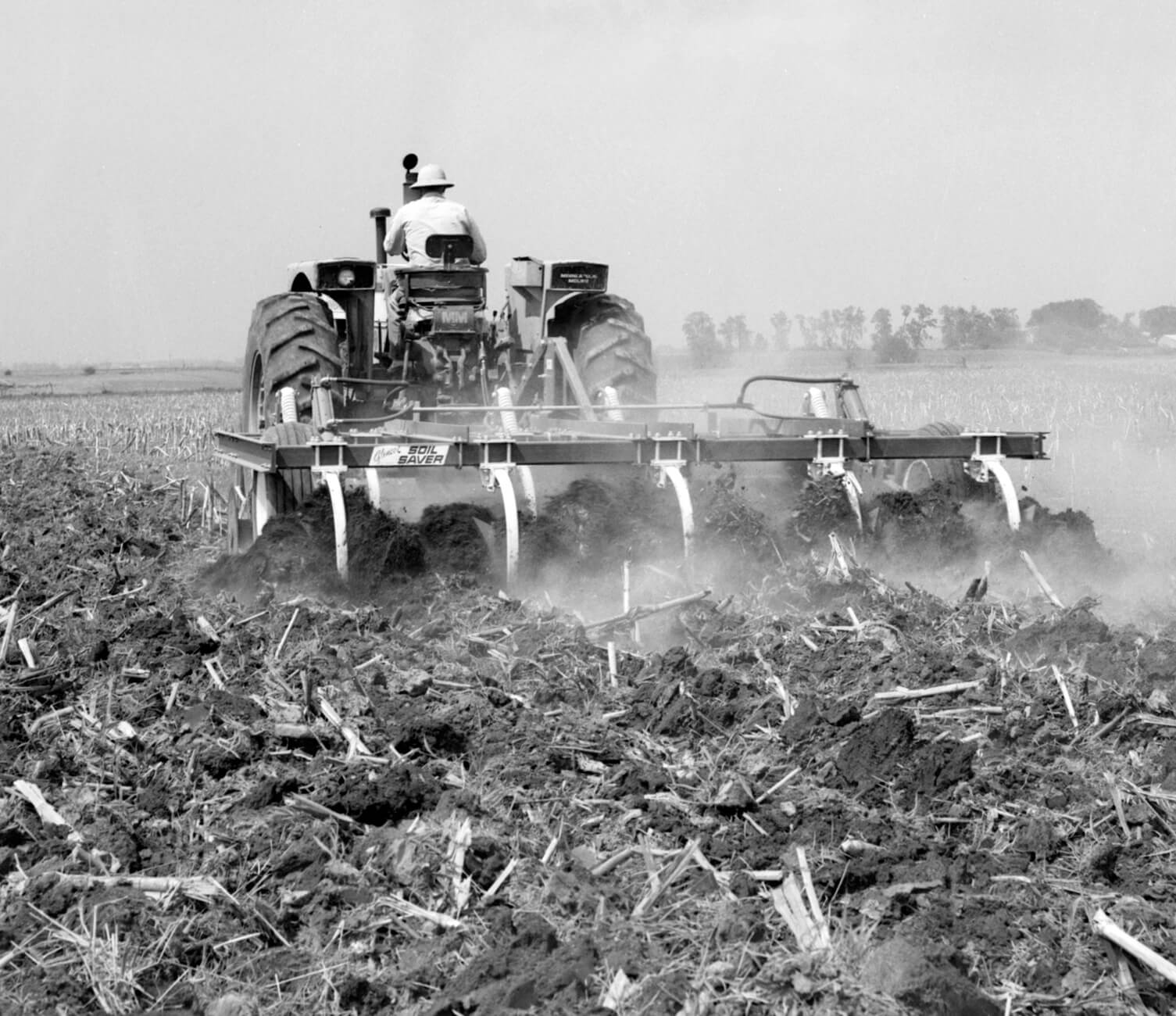 They made only two trips through the field — the first with a stalk shredder, then with a planter that used coulters (steel disks) that cut the crop residue and left a trench for the seed. 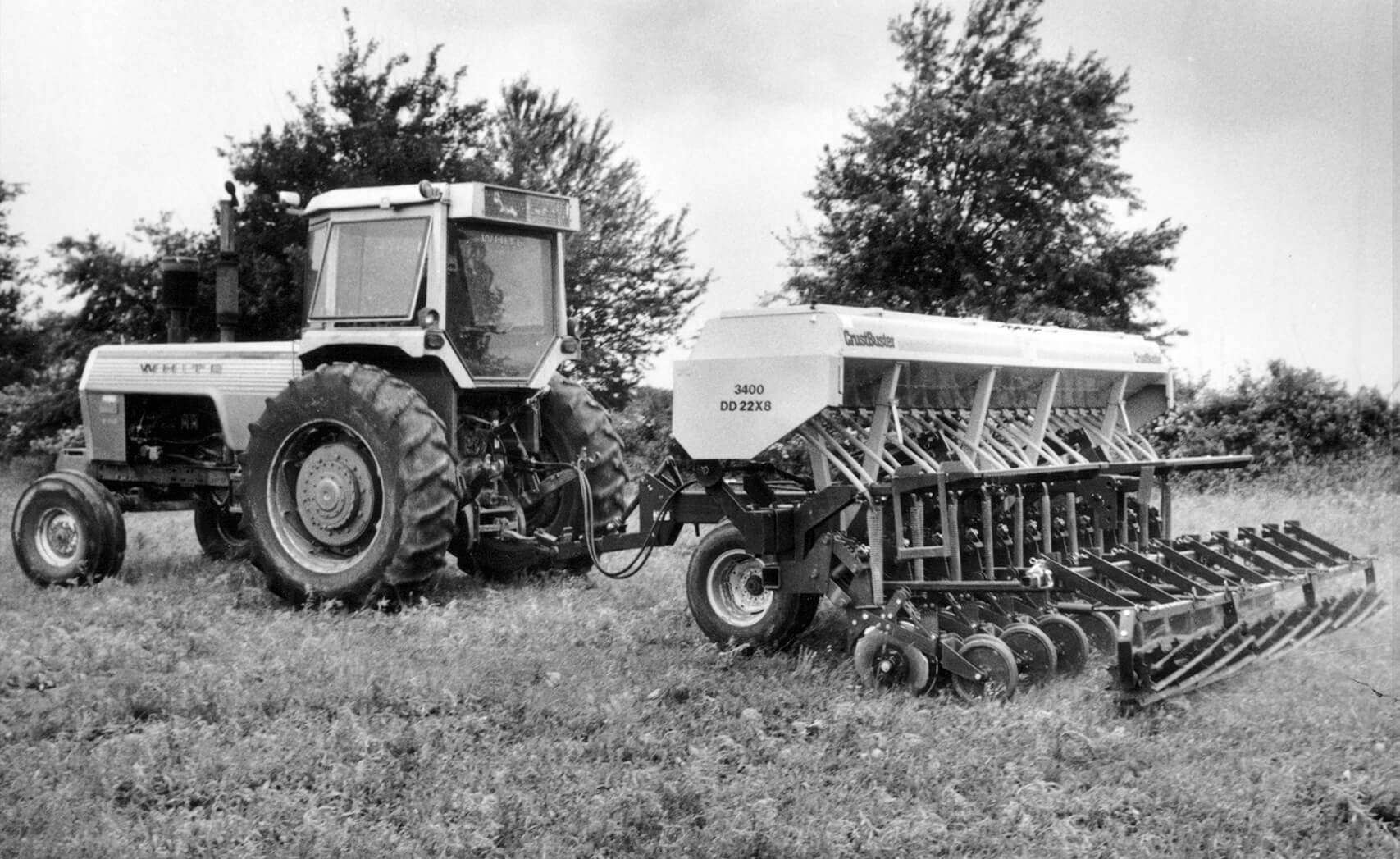 Previous: Draining the Prairie Next: Fertilizer