In 1971 the Equal Rights Amendment (ERA), authored by Alice Paul in 1923 and submitted to Congress every year since its introduction, was approved by the U.S. House, and the following year by the full Senate. Soon after that it was submitted to state legislatures for ratification.

With a deadline of March 22, 1979, McLean County women and their male supporters took up the challenge to get the ERA passed in Illinois. They argued that the ERA would abolish gender discriminating laws, make gender favoritism and prejudice illegal, clarify legal standards for court rulings on gender discrimination cases, and eliminate the need for a woman to get her husband’s consent to get credit or run a business.

Alton, Illinois resident Phyllis Schafly mobilized conservative women (mostly housewives) in opposition to the ERA. They argued it would deny women the right to be supported by their husbands, privacy rights would be overturned, women would be sent into combat, and abortion and homosexual marriages would be legally sanctioned. Among Stop ERA supporters were members of fundamentalist religious groups. Local Illinois legislators, Senator Harbor Hall and Representative Gil Deavers, listened to both sides, but did not appear interested in passing the ERA.

A local chapter of the National Organization for Women (NOW) was organized in the spring of 1973.

McLean County's NOW had support from many other McLean County organizations, including the Women's Political Caucus, The League of Woman Voters, Democratic Women's Organization, Men for ERA, American Association of University Women, as well as women's faculty groups at Illinois State and Illinois Wesleyan universities.

Luellen Laurenti, an ISU Spanish and Women's Studies teacher, was among the women who stepped up to lead local women in their fight for equal rights.

Laurenti worked tirelessly to organize local meetings and rallies in support of the ERA in Illinois.

Laurenti joined the Women's Political Caucus, whose goal was to elect legislators who would vote for the passage of the ERA. She became the 44th district coordinator for ERA Central, a statewide group supporting ratification of the ERA, and later the legislative coordinator of the McLean County chapter of NOW. 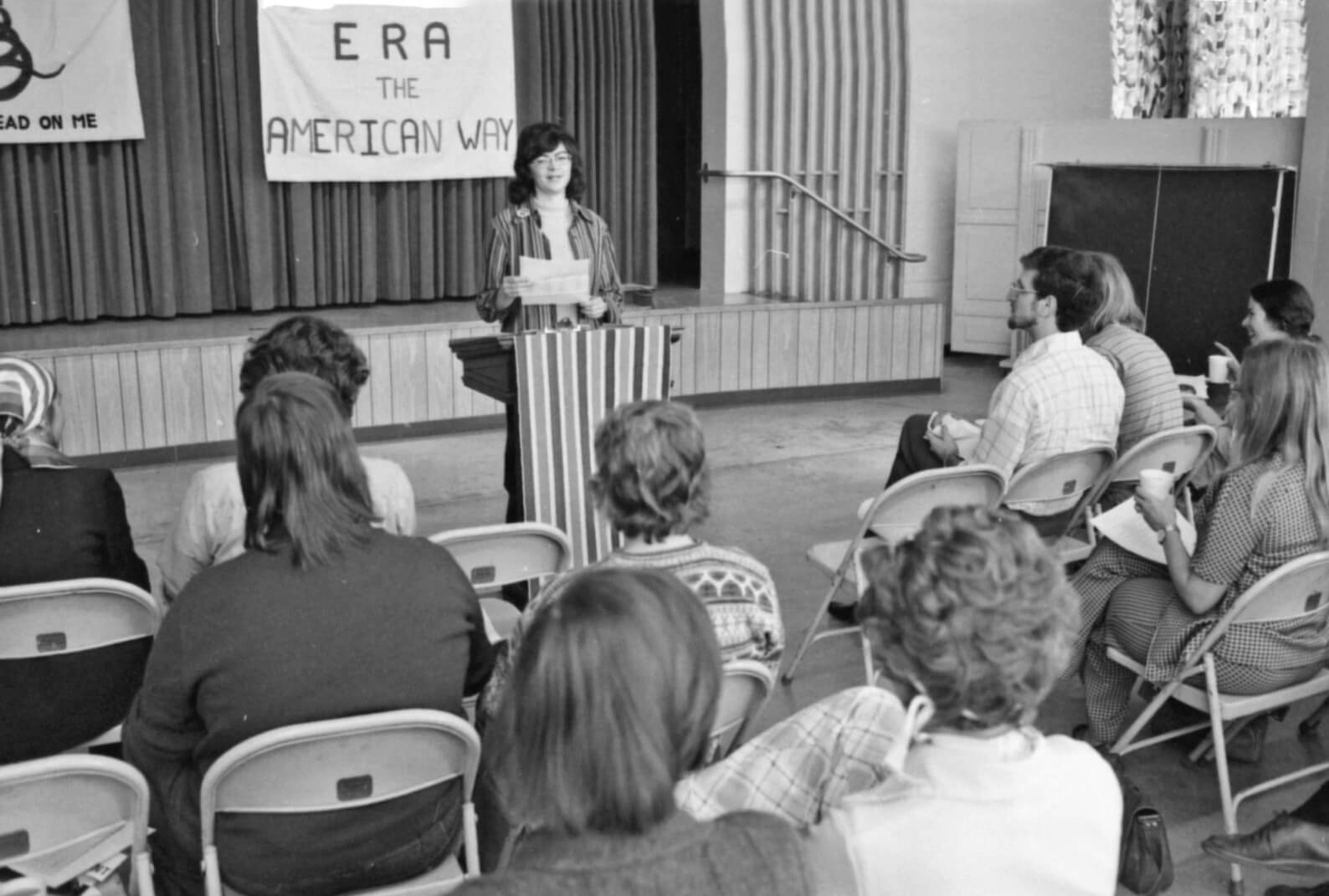 “We don't want what men have. We want to work as partners to make sanity prevail over insanity; justice over injustice; rationality over irrationality; love over hate; dignity over indignity and peace over war.”

On April 9, 1975, Laurenti and 100 other local supporters rallied with thousands of Illinois supporters in Springfield.

The following October, Laurenti kicked off a drive to get 10,000 McLean County signatures in support of the ERA with a rally at Bloomington's Wesley United Methodist Church. The measure had already passed in the Illinois House.

“It is time for the Senate to join the House and carry out the wishes of the majority by ratifying the Equal Rights Amendment this year.” 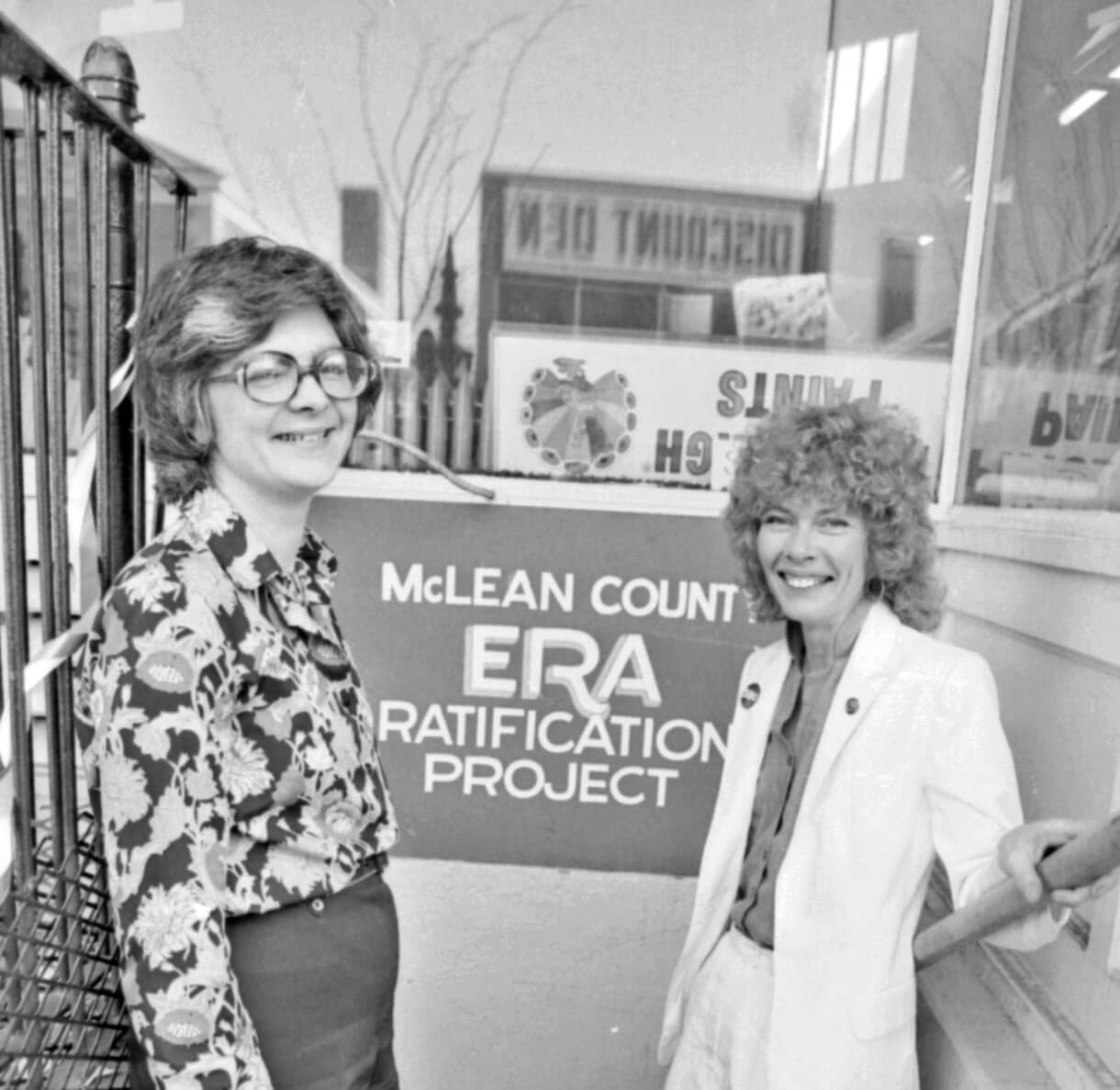 Local opponents to the ERA included Sarah Lohr and Violet Hamilton, both of Normal. They worked hard to persuade McLean County representatives not to support the amendment.

In November 1978, Lohr, chairwoman of McLean County’s Stop ERA, organized a Springfield rally. McLean County legislators Harbor Hall and Gil Deavers voted against the amendment, which did not pass that fall.

On December 11, 1978, both sides faced off on Bloomington’s TV 10. ERA supporters Laurenti and Sandra Harmon, and ERA opponents Hamilton and Lohr debated the affects passage of the Equal Rights Amendment would have on women. 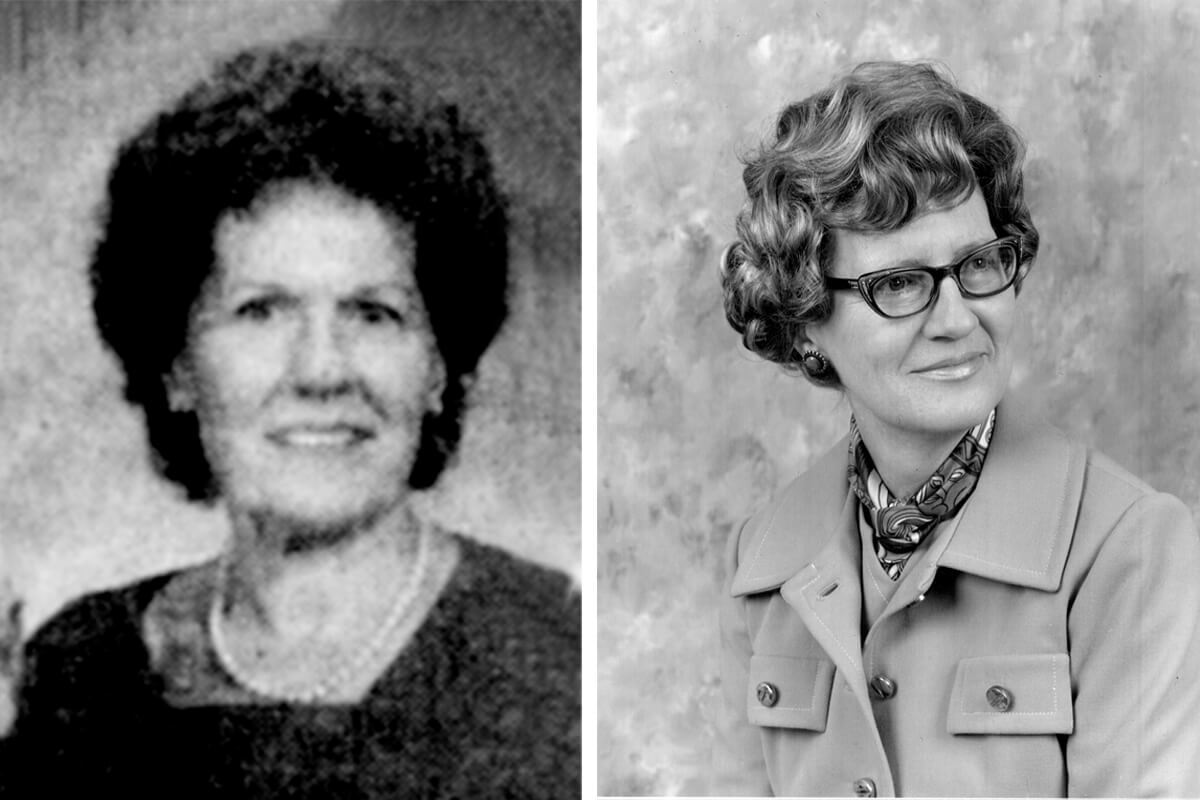 Pro-ERA supports breathed a sigh of relief in the fall of 1978, when Congress extended the deadline for ratification of the ERA to June 1982.

Lohr called the extended deadline for the ratification of the ERA...

“Blackmail...an unconstitutional process. The Womens Libbers have managed to make members of Congress write laws to suit their purpose. It really infuriates me... Our plans are to do the same as we've been doing for the past six years to try to educate the public to the dangers of the ERA. The Equal Rights Amendment will not get them (women) anything they don't have now, and it will limit their options.” 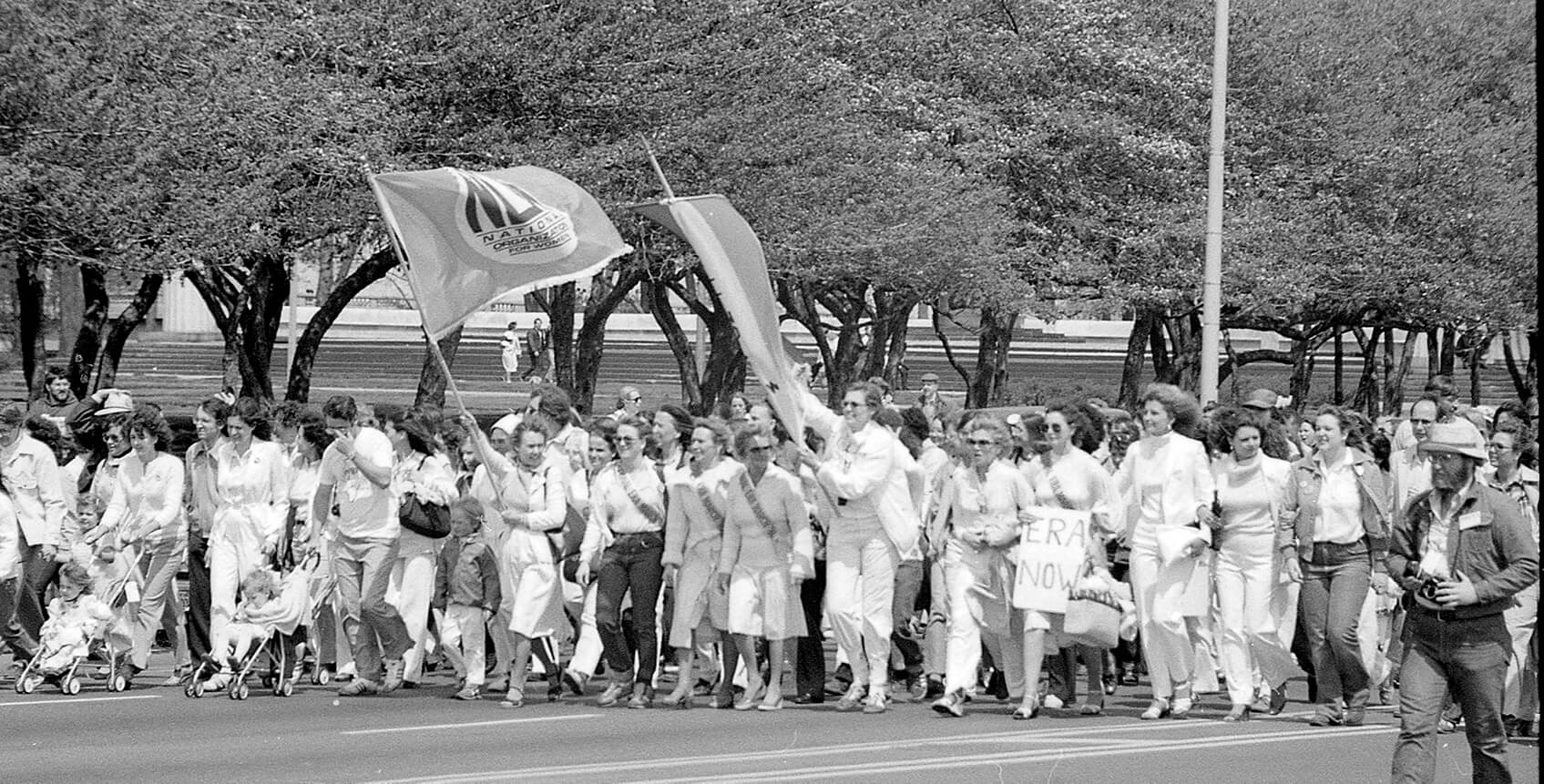 When the Illinois Republican Convention met in 1980, they voted against continuing national GOP support for the ERA, and chose Phyllis Schafly as their alternate delegate to the Republican National Convention.

Despite strong local grassroots efforts, and numerous votes in the Illinois legislature, Schafly and her Stop ERA supporters successfully prevented passage of the ERA in Illinois. 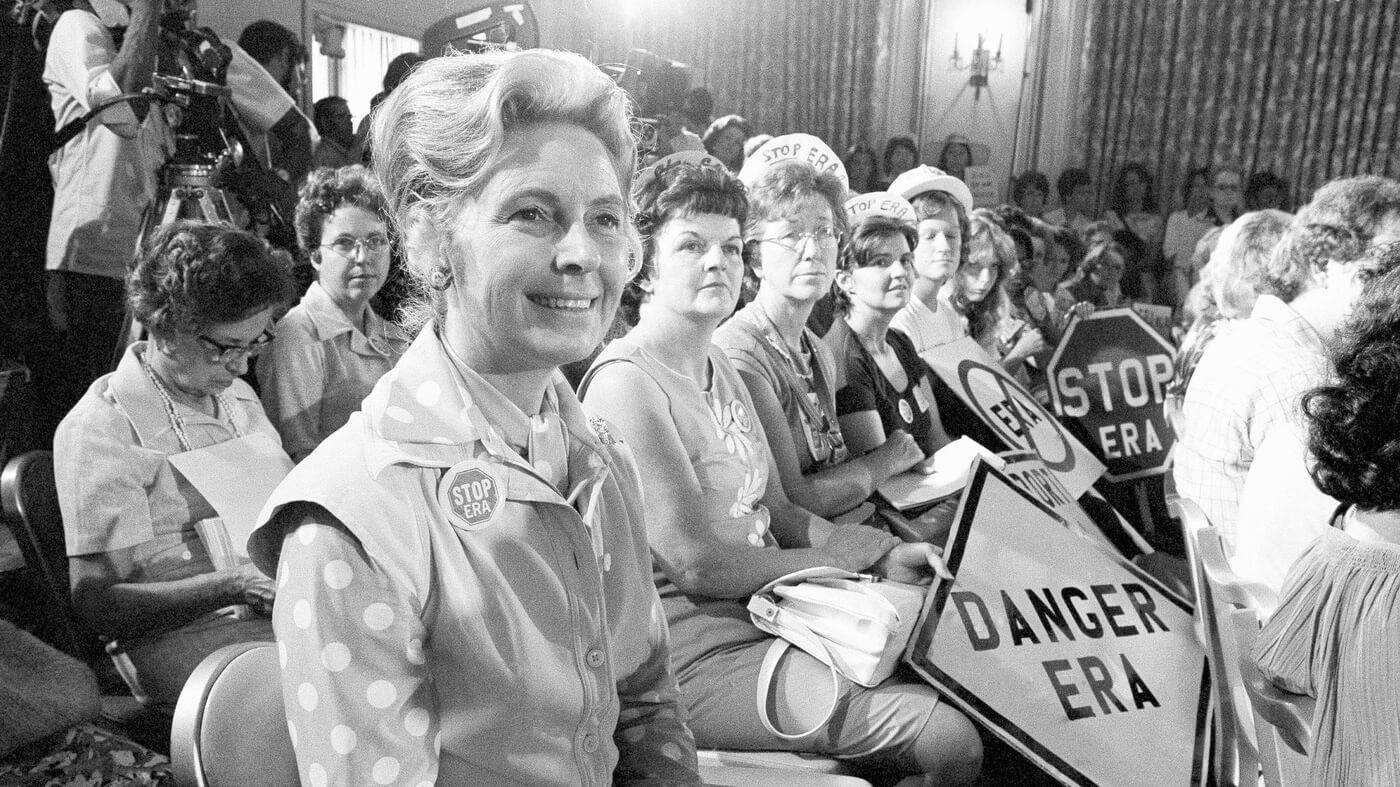 On May 30, 2018, the bill was ratified by the Illinois legislature. In the fall of 2018, legislation was pending in congress to eliminate the 1982 deadline and accept ratification, should 38 states pass the ERA.

How effectively did Illinois ERA advocates voice their views on the issues?

Why were their efforts unsuccessful?